Dan Knuth, our technician and training specialist, assisted on a TRU job a few weeks ago in South Dakota for Custom Concrete Creations. There were some issues with material flow and color application, so he helped troubleshoot and in the end assisted in producing a successful overlay. Read on for the details of what they did and how they combatted various problems. 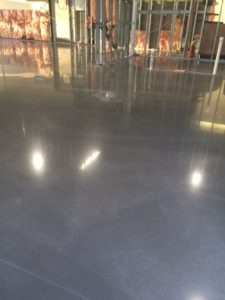 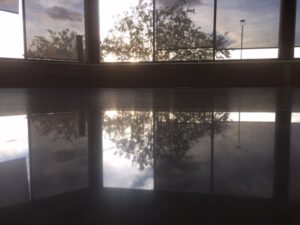 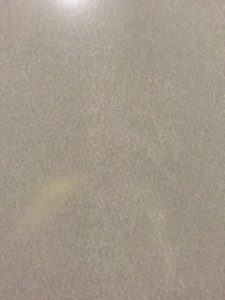 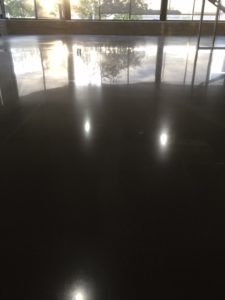 The floor layout was too wide to complete in one pour, so it was divided into three 10′ wide areas. The three areas were sectioned off with weatherstripping. We did this to maintain a 3/8″ depth throughout the entire floor. The wider the area is, the more difficult it becomes to get a consistent depth of at least 3/8″ because the material wants to flow as more material is placed in front of it.
The first 5 bag batch of TRU was mixed for 2.5 minutes and was too fluid. This was apparent when the mixing material was poured through an 1/8″ classifier screen to catch any unmixed material – it went through the screen like water. Fortunately, the floor had a trench that was 1-1/2″ in depth, so we just poured the material in the trench as an “underlayment.” We took 16 oz of water out of the next mix, mixed for 2.5 minutes and it was still too “watery” so we poured the second batch in the trench as well. We took another 16 oz (32 oz total) out of the third mix, mixed for 2.5 minutes and it resulted in the desired flow we were looking for, so at that point we began pouring the floor.
The next day the first order of business was to cut and fill the control joints. Control joints in the substrate were fairly straight, so we marked them on the wall prior to pouring so they could be recut. This was the first order of business because we were only going to use one metal-bond diamond and it is recommended to fill control joints right before your last metal-bond. We then began cutting the floor with medium soft 80 grit metal-bonds underneath an HTC 800 Classic and an HTC 800RX.
After the first cut, the skin was removed on 95% of the floor and we had good sand exposure. However, a second cut was completed with the same diamond to achieve more consistent skin removal and sand exposure. 100 grit HTC Fenix pads were then used to remove the 80 grit scratch and worked well on the three head 800 Classic, but the four head 800RX had to switch from the Fenix pads to the 100 grit HTC Big Blocks to remove the 80 grit metal-bond scratch before using the 100 grit Fenix pads. 200 grit Fenix pads were used, the floor was scrubbed, then Ameripolish’s 3DHS densifier was applied. Husqvarna’s Overlay Flex Polishing Pads were used to polish the floor (400 grit – 3000 grit) after densification was completed. Finally, a guard was applied and burnished to complete the project.
Custom Concrete Creations specializes in polished concrete flooring. They service industrial, commercial and residential clients throughout the Midwest. Other services include acid staining, sealing, joint filling and floor prep.