The HTC Ravager's Performance As Told by 2 Concrete Contractors

The HTC Ravager is a relatively new grinding tool with the ability to remove thick coatings and expose large aggregate. Two of our customers have recently used the Ravager for small demos, one removing a coating and the other exposing aggregate. Read on for the results.
1. Coatings Removal: The first is Scioto, who removed 10-12 millimeters of urethane epoxy coating in one pass with the Ravager. They were pleased with the outcome; you can see the Ravager in action in the images and video below. 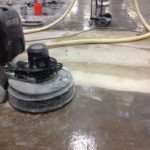 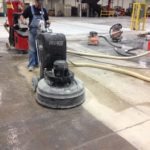 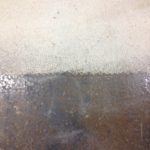 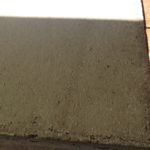 2. Exposing Aggregate: The second demo was by Applied Flooring, who did a 10′ x 10′ patch in their shop on an already polished floor. The goal was to expose large aggregate with an HTC 800 Classic and the Ravager. The Applied crew tested at various speeds (1, 5 and 10), and determined that the higher the speed, the more quickly this tool tore up the concrete. With that said, the Ravager effectively took the slab to the desired aggregate after two passes. One thing to note for anyone wanting to use the Ravager on an 800 Classic though, is that the tool makes the machine stand up tall, so you may need to adjust your shroud so as not to have a gap that allows dust and dirt to fly up. See images from this demo below. 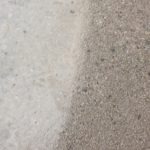 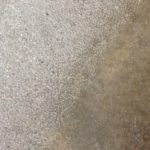 
We’re looking forward to seeing how well this tool performs with other jobs. The only question now is how long a Ravager tool lasts…time will tell. The Ravager is relatively straight forward and has many applications, so there is a lot of potential. For more information on the HTC Ravager, please refer to the product spec sheet. And if you’ve used the Ravager and would like to share your experience, please comment in the section below.